A former Pfizer finance executive alleges that Pfizer is a company which hires detectives who pay bribes, use corporate spies, pretexting, and pays off competitor's employees to leak confidential information, and uses other potentially illegal means of obtaining information for the company. And the documents he has provided appear to support his allegations.

This is the second of three articles focusing on allegations by a centrally placed whistleblower; Mr. Ashok S. Idnani, a former Deputy Manager in Pfizer’s finance department who spent 28 years working for the company.

Idnani was fired after he informed Pfizer CEO Jeff Kindler of numerous illegal acts and provided documents to Pfizer's Corporate Compliance and Corporate Audit departments in support of his allegations.

In my first article, I described how a manufacturing plant had been sold at less than 10% of its government assessed market value, with over $30 million disappearing into thin air. 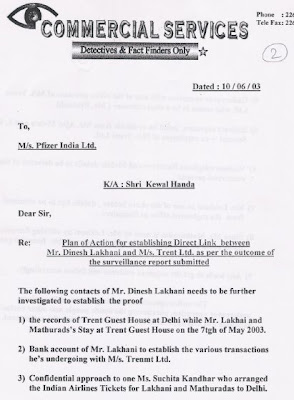 Here is new information about that meeting: When they arrived in Mumbai they received written proof that Pfizer India had hired a team of detectives who operated by using bribes, corporate spies, pretexting, and even suggested paying off employees in other companies to leak confidential information which Pfizer desired.

Dinesh Lakhani was one of the persons who had his privacy violated by Pfizer. He was a Parke-Davis shareholder who opposed the Pfizer Warner-Lambert merger.

The Pfizer and Park-Davis merger in India had been approved by a single-judge bench on February 7, 2003. However, four shareholders — Dinesh Lakhani, Janak Mathuradas, Arvind Vyas and Hiren Vyas — appealed against that order and obtained an ad interim stay. The Bombay High Court admitted the appeal by these minority shareholders in May 2003. More here.

This very much angered Pfizer management, and they sent their goons to spy on Dinesh Lakhani and also Janak Mathuradas. Janak Mathurdas is known in India as an activist investor who frequently opposes management, including objecting against fat pay packages. More here.

In this article you'll be able to download and read Pfizer's surveillance reports on these two men and many others. Clicking on any image in the article will provide larger image. 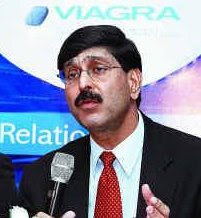 Hence, these surveillance reports demonstrate that senior Pfizer management was involved in this activity.

It is also clear that Pfizer Corporate Compliance and Corporate Audit appear to have no problem with such clandestine efforts.

After all, if they did, Mr. Handa wouldn't still be the Managing Director of Pfizer India. 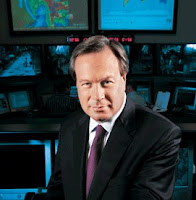 The key person in charge of Pfizer’s entire security apparatus at the time all this happened, in 2003, was Mr. Jeff Kindler.

Mr. Kindler is now Pfizer CEO, and on the image to the left he is posing in Pfizer’s security and monitoring bunker. At the time these events took place, Pfizer's Corporate Compliance group reported directly to him, so it is likely that he would have reviewed and approved any recommendation made by Ms. Indrani Franchini, Deputy Compliance Officer related to the surveillance operation in India. 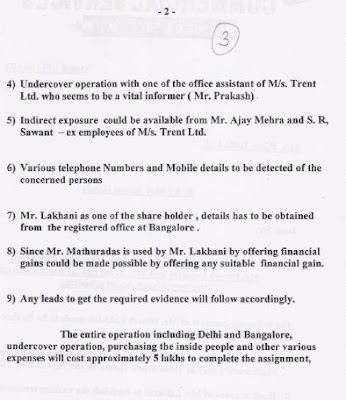 According to pages 1-2 of the June 2003 surveillance proposal (picture above and to the left), Mr. Handa was requested to approve a plan which included obtaining confidential and personal bank account information for Dinesh Lakhani, the Parke-Davis shareholder who sued Parke-Davis over the terms of Pfizer's acquisition of that company.

The document also lists need for phone records, even bribes are openly discussed.

The report also makes clear that an office assistant working for Trent Ltd. is available as an in-house spy. 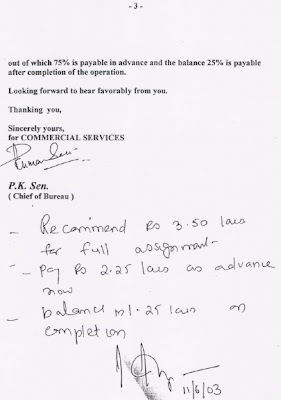 Page 3 (left) shows Pfizer's Company Secretary A. Anjeneyan’s handwriting and recommendation to Handa (Anjeneyan reported to Handa and has since left the company).

According to the surveillance reports above, Pfizer also spied on Shreeharsha Vasant Phene (picture left), who at the time was a corporate planning vice president of Trent Ltd, which owns supermarkets and retail stores, and belongs to the TATA group (more here).

Mr. Idnani comments: "Why Pfizer and Handa ordered this surveillance, I cannot fathom. It is possible the Pfizer India people were taking advantage of the situation to settle personal scores or even to harm and blackmail them." 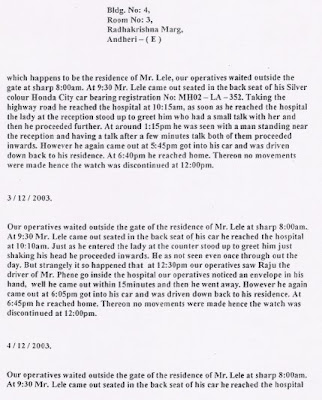 Pramod Lele, one of the targets for Pfizer's investigations, had been the country manager of Warner-Lambert (Parke-Davis) in India, and had started reporting to Pfizer N.Y where the merger had already taken place.

According to Idnani, he had been promised that he would become the Pfizer India managing director of the merged company.

At a meeting in New York he received a shock, when he was suddenly told that Hocine Sidi Said had been designated as the new country manager of the merged Pfizer/Park-Davis organization. More here.

Pramod Lele resigned and took over as the CEO of Hinduja Hospital in 2003 (more here), and later that same year Pfizer's surveillance of him started. 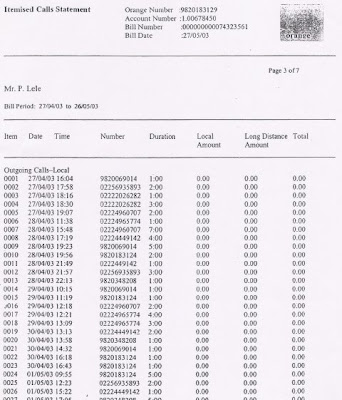 These phone records have most likely been obtained through “pretexting” a practice in which someone impersonates a person to obtain his private data.

This is a practice which led to the resignation of Hewlett-Packard’s chairwoman, Patrica Dunn.

In her case the target was a board member on her own Board of Directors.

Idnani has in his correspondence with Pfizer asked whether any Judge of the Bombay High Court who was hearing the Dinesh Lakhani vs. Parke-Davis. case, was also followed.

He considered this a possibility because he had seen another document, which he no longer has access to, attached to the surveillance reports with a listing of people who were monitored, in which at the top the initials "HCJ 2" was followed vertically by "Lakhani," "Janak," "PL," "Phene."

Pfizer is not likely to tell us.

But one thing is clear.

Pfizer may very well be in violation of the Foreign Corrupt Practices Act. 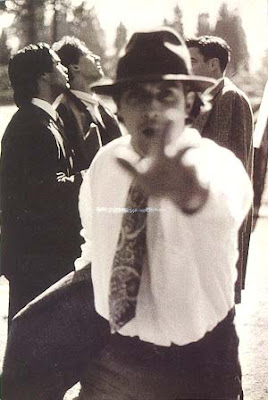 And even if that were not the case, at a minimum, Pfizer has been exposed as a company going to any length to win the game they're playing, using hired goons to do their shadowy bidding.

Don't forget, Jeff Kindler was the man who was in charge of Corporate Security during this time.

Imagine to be a fly on the wall and know all of Pfizer's secrets . . . the way Mr. Kindler knows them.

One thing is for sure; he'll never tell us.

But, perhaps it shouldn't be very surprising that Mr. Kindler, who was initially described as the "dark horse" in the race to replace Dr. McKinnell, is now Pfizer's new CEO.

STAY TUNED FOR PART THREE IN THIS SERIES TOMORROW: Allegations about bribes to government officials and voodoo practice in Pfizer's finance department.

Update - don't miss the other parts of this story:

Email ThisBlogThis!Share to TwitterShare to FacebookShare to Pinterest
Labels: Pfizer

I wonder if Kindler's future cell mate is a fan of Viagra?

Peter, could there be another book in the works? Something like "The Pfizer Two-Step: or how to avoid payment of ANY tax!"

Looks like this going to be never end case. There so mush to be solve because they alot missin unsolved questions. May it will ends everything peacefully.

Nice exposure of more pfizer corruption, glad you're around to do make sure the public know about it.

There's some more here, re action now being taken against pfizer having been involved in illegally testing drugs on children in africa nearly ten years ago:

Isn't Pfizer's "Blue Book-- Summary and Policies and Procedures" INTENDED specifically for investors (why they place it on the "for investors" section of their website and why there is a total disconnect between how it SAYS Pfizer and its employees operate and how they all actually do operate)???

Isn't the Securities and Exchange Act supposed to punish those in corporate leadership who lie to investors and/or make material omissions to either induce investment or to induce investors not to dump their stock?

Isn't Pfizer's Blue Book (Summary of Pfizer Policies and Procedures) a bold-faced lie to investors to induce them to invest and believe that their money (including retirements) is invested in sound holdings with minimal risk, despite this and so much other behavior Pfizer directors have known of for at least 4 years that could jeopardize Pfizer's value?

Isn't there a big-time issue under Sarbanes-Oxley and/or the Securities and Exchange Act of 1934 making this hidden behavior and knowing misrepresentations to investors flat-out Securities Fraud???

we naver know pfizer have such bad practices. some of our relative works with pfizer.feel bad about them. The way they treat there down the line employe also be enquire properly. you will find more about pfizer india. god help....