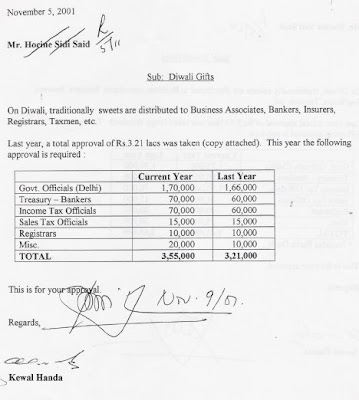 A former Pfizer finance executive alleges that Pfizer paid bribes to government officials and tax authorities. He also talks about a darker side of Pfizer – voodoo worship.

This is the third of three articles focusing on allegations by a centrally placed whistleblower; Mr. Ashok S. Idnani, a former Deputy Manager in Pfizer’s finance department who spent 28 years working for the company.

You can read the first article here, and the second here. 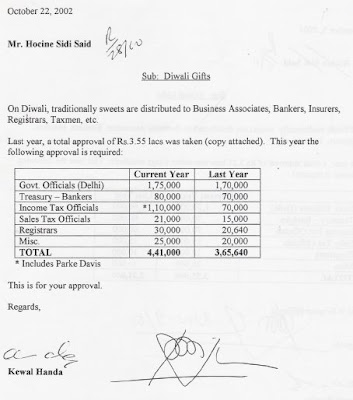 The recipient of this authorization was Mr. Hocine Sidi Said, who was the Managing Director for Pfizer India at the time when this internal memo was written and the sender was Kewal Handa, CFO Pfizer India.

Kewal Handa was later promoted and is currently Pfizer’s Managing Director. Please note that both men signed these documents. 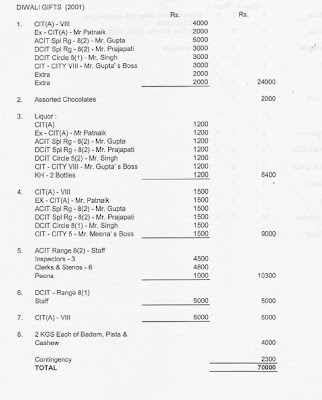 Mr. Ashok S. Idnani claims that in spite of the fact that “sweets” are listed on the first two pages, what was usually given to income tax officials was liquor.

This is confirmed on the third page, which according to Idnani, lists income tax officials by name. 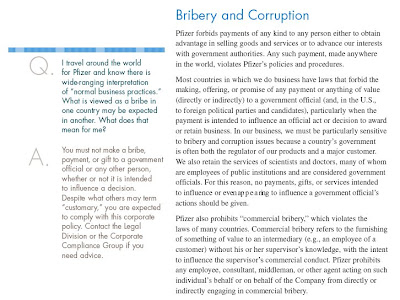 These documents should be compared with Pfizer’s Blue Book, which explicitly forbids giving "anything of value to a government official."

Pfizer's Blue Book also states, "You must not make a bribe, payment or gift to a government official or any other person, whether or not it is intended to influence a decision."

Based on this, it would appear that if Pfizer doesn’t remove Kewal Handa after this article, Pfizer’s entire “business policy” can be thrown in the trash bin.

But maybe that won't happen.

Mr. Handa is a big fish inside Pfizer. 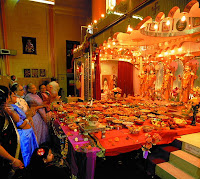 The “Diwali” mentioned in the documents is a major Hindu festival in October, and, just to be sure, I asked Idnani if the perception of these “gifts” is different in India compared to the US.

He responded, “Naturally, the income tax people will be obliged to you and 'take care of you'.” He adds, “Frankly, liquor is a taboo when you talk of a religious festival in India. For Diwali, sweets and gifts are acceptable, but liquor . . . no way”

If Pfizer has provided bribes overseas, they would be in violation of the U.S. Foreign Corrupt Practices Act. The fact that Pfizer's corporate compliance department has investigated these allegations and documents, fired the whistleblower and rewarded the man giving liquor bottles to government officials, in clear violation of Pfizer policy, says everything we need to know about Pfizer and their commitment to ethical business practices.

But there is more amazing information to be found in Idnani’s many e-mails to Pfizer.

Apparently he has been questioned about voodoo practice among Pfizer’s employees and this is how he responds in a December 11, 2006 to John Hong, Pfizer Corporate Counsel, International Investigations and Programs, copied to Jesma Johnson, and Melanie Trinidad:

“If you recall - at our teleconference on November 16, 2006, you questioned me on [redacted] practices Occult and Voodoo and about his Guru. You also mentioned it could be personal belief. If this is indeed, personal belief, then you are right, it is not an issue."

Idnani adds in his e-mail, “[Redacted] told [redacted] and [redacted] in the meeting on May 17, 2006 that his Guru (spiritual) in his presence brought back to life a dead child and (pointing towards me) he has told [redacted] many times before, if his Guru tells him to jump from 23rd floor he will jump.

It has come to my knowledge, that recently, the Income-Tax Authorities of the Government of India (equivalent to IRS/CID in U.S.) served notices on several employees working in Finance Division demanding from them a reply and detailed explanation as to why they have given certain amounts in the year 2004, to an individual named "Mr. Shivdasani". The questions asked were like, How long they know this person, Why they paid the money to him, What services were rendered by this person.

Now who is "Mr. Shivdasani". You guessed correctly - he is [redacted]'s Guru."

At this point in the story you may wonder why Indian income tax officials were interested in whom had sent checks to the guru. The explanation is simple, according to Idnani. In return for the checks they received the same amount in cash. Idnani thinks this was done so that the guru could practice good old fashioned money laundering, converting stacks of ill-gotten gains into clean money that could be traced to innocent individuals. And he says that's exactly what the tax authorities did.

And why would the employees in Pfizer's finance department participate in such a scheme?

Idnani has an explanation for that as well in his e-mail to Pfizer:

"The Income-Tax Authorities were assessing the Income-Tax Return of "Mr. Shivdasani" for the year ended March 31, 2004, found entries of the so-called "donations" in his Tax Return and took the matter for scrutiny and investigation.

None of these employees know the person or at least most of them do not know this person, have not met this person, have not received any services from this person for the payment they have made to him. Yet, they were asked by [redacted] - as they were trapped - to blatantly lie in their recorded written statement submitted to the Government of India (Income-Tax Authorities).

For example, they averred, that they knew this person for certain times. They were explicitly directed by [redacted] not to mention in their replies that they worked for Pfizer (Pfizer was a common employer). The Income-Tax Authorities had sent the notices to the residential addresses of these employees.

In other words, [redacted] has forced his Pfizer reportees and colleagues, vulnerable to Undue Influence into Money Laundering activities in Pfizer premises."

We only have Idnani's word and e-mails to Pfizer confirming the voodoo story. But many of his other allegations could be verified with independent documents, and Idnani would probably not have brought these allegations all the way up to Jeff Kindler and other senior Pfizer managers, if he didn't believe them to be true.

You be the judge.

Update - don't miss the other parts of this story:

Email ThisBlogThis!Share to TwitterShare to FacebookShare to Pinterest
Labels: Pfizer

Mr. Kindler, one bucket of US Dollars is worth 42 buckets of Rupees. Just making sure you don't get ripped off.

Do you know what happened with Hocine Sidi Said? Did he left Pfizer?

Isn't the Securities and Exchange Act supposed to punish those in corporate leadership who lie to investors and/or make material omissions to either induce investment or to induce investors not to dump their stock when corporate mismanagement would jeopardize stock value?

Isn't Pfizer's Blue Book (Summary of Pfizer Policies and Procedures) a bold-faced lie to investors to induce them to invest and believe that their money (including retirements) is invested in sound holdings with minimal risk, despite this and so much other behavior Pfizer directors have known of for apparently at least 4 years that could jeopardize Pfizer's value?

Isn't there a big-time issue under Sarbanes-Oxley and/or the Securities and Exchange Act of 1934 making this hidden behavior and knowing misrepresentations by company directors to investors flat-out Securities Fraud???

Jeff, Hank, Karen, David and others have been “in the know” AND legally liable “directors” during the entire period in question—and have each made statements to induce investment while apparently making material omissions about very important facts to investors in each of their quarterly and annual SEC filings since the time these e-mails evidence they each knew or had reason to know of this corruption, which the four of them instead apparently just tried to cover-up rather than correct. 20 years in federal prison under Sarbanes-Oxley, anyone???

The Foreign Corrupt Practices Act prohibits US corporations from making payments to foreign government officials that "must be intended to induce the recipient to misuse his official position to direct business wrongfully to the payer or to any other person"...See http://www.usdoj.gov/criminal/fraud/docs/dojdocb.html

It will be quite interesting if criminal action will be started in this particular case.... :-)))

All comments seem one sided. Calling company employees rogues seems extreme. It seems disgruntled employees are using old weapons stored for a rainy day to settle socres. Otherwise why would a 2003 or 2004 matter be brought up in 2007. Why are internal documents taken out without authority and displayed on website? One wrong does not right another. I find lot of supressed anger at the responses. Perhaps all these are Pfizer employees.

Pfizer has biggere problems then this. They are on a melt down with their systems (all being outsourced to India). The financial transparency is less then clear, more like dishwasher. Collapsing revenues and a global service center (headed up by the same Indian who created the disaster in FORD). I strongly beleive that Alan was given the blame for this because it is still a one way street but unfortunately a dead end awaits Pfizer.

In Pfizer India top management staff and MD is very good in delivering lectures on "Intigrity and Corporate Compliance". Present EC has made the glorious company into ruges by robing the resource and money for their individual assest. They should all be pulled to court by share holders and other employees. Pfizer India MD has the habit of clarrifying the status on telecom to all the staff members on any compliance issue and he should not forget that everyone is closely watching him, what he does now? Telecon? Resignation? Retaliation or spying?

Do you know that Pfizer India generates huge unaccounted stocks thru' third party manufacturers to generate resource for bribing the Govt. official. Entire range of PfIZER PRODUCTS SALES IN OPEN MARKET AT DISCOUNTED PRICE. ONE CAN CHECK MARKETS OF DELHI, AGRA, LUCKNOW, PATNA, KOLKATA FOR THIS.

Open door policy ... Values .. intigrity .. employee benefits .. quality of life of Pfizerites ---- all sounds good-- at least in India. It is a place for minting money for the top management. There are several cases of bibery to govt. officials, union heavyweights and even customers (doctors). Only the methodology varies. One really feels bad to find that the glory of a great organization is losing out to be 'business house' with eroded maral values that are preached and not practised.