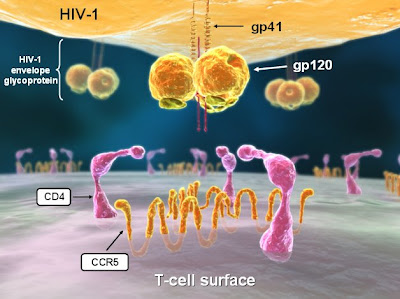 The drug is maraviroc, and it will be the first CCR5 receptor antagonist on the market. This group of drugs blocks a secondary but crucial doorway typically used by the human immunodeficiency virus to enter white blood cells. Barbara Ryan, analyst for Deutsche Bank North America, projects that annual sales will peak at $500 million by 2011.

But now there’s a fly in Pfizer’s ointment; an internal whistleblower, whom we’ll call Jane Roe. She claims that Pfizer used the HIV sales force to illegally promote the drug to doctors before approval.

Roe says that the illegal conduct started already in November 2006, when Pfizer was trying to set up “expanded access sites” throughout the country for a maraviroc experience trial. The sales reps were used as liaisons to help medical affairs enroll new research sites and the sales reps were allegedly asked to promote the “trial,” in which doctors were paid $1200 per patient for one year, along with free drug.

Evidence of this, Roe says, is an “unapproved slide set” for maraviroc, which was given to some HIV sales reps in November 2006. The reps were then asked to give these slides to key doctors (download the-smoking-gun presentation here) The slides were allegedly used to “goose the skids” as well as in verbal discussions which included data outside what was published. Roe claims she was asked to slip the slide presentation on a memory stick to physicians whom the company trusted.

Roe points out that the actual paying of a fee to institutions is not generally wrong but using sales reps to promote a drug before approval violates FDA rules. Normally drug companies avoid using the sales force in any prelaunch activity, because it looks by definition like, well, selling . . . . and they need FDA approval to do that.

Roe says that some reps expressed concern to her, but were unwilling to rock the boat and went along with this unusual task. She says many physicians were also concerned that she and her colleagues were putting themselves in a difficult situation by participating in this program and some were upset.

Roe goes on to say that, "a researcher told the medical director she wasn't interested and said very loudly she did not know we were coming in to strong-arm her. It was during a lunch meeting at her office and very uncomfortable. I think as a result of these actions at the very least people thought we were inept running around with sales reps and a medical director who had never worked in a clinic or had no HIV experience. "

Roe claims this effort was directed by senior sales management and medical affairs, and she has shown me an e-mail from a Pfizer medical director for the HIV team, with an MS, PhD degree after the name, which supports the allegation that there was an ongoing coordination between medical affairs and the sales force to enroll physicians in the trial. Roe also says she was part of several meetings the medical director had with doctors.

In fact, Roe and some others in the sales force were so disturbed by this program that they not only objected to the company, but also recently reported this to the HHS Office of the Inspector General. (Pfizer has been forced to sign a Corporate Integrity Agreement, and any violation of this agreement is handled by the OIG.)

The sales force promotion of the “trial” went on until January 2007, when the sales force involvement was abruptly stopped. Also noteworthy, is that Roe says the sales reps were recently asked to delete all materials related to maraviroc.

A closer scrutiny of the slide presentation reveals that the author name electronically embedded in the presentation is not the doctor on the first slide, but “Peter Pinkowish.”

His name can be found on another HIV related slide presentation, for Bristol-Myers Squibb (available for download here), in which his title is “Medical Editor.” So here we have the first clue that this was a slide show written by someone who appears to be a hired gun. That smells marketing. In yet another medical paper, related to hormone therapy Pinkowish's title is “Medical Writer,” and it wouldn’t be far-fetched to assume that this is a person working for a medical education agency, churning out advertising disguised as semi-scientific papers and presentations for drug companies.

So why would Pfizer risk its reputation, using the sales force to premarket doctors?

Roe responds, "It is my understanding the enrollment has hit several obstacles because as I mentioned the complexity of miraviroc as well as the test that need to accompany it. The research shows half of all people or thereabouts cannot safely take this product. It has become a very difficult issue which is why in my opinion they enlisted the sales force to get buy-in prior to approval. It has become clear that Pfizer's commitment to HIV may depend on the approval and success of this product. Maraviroc provides a needed benefit to HIV patients and even though it may never be a Pfizer blockbuster it fills a gap since the current Pfizer HIV product Viracept is almost 9 years old and not considered first line very often. It seems this was a desperate attempt to impact futures sales; I guess some call this premarketing I call it bullshit and against the law."
Posted by Peter Rost at 12:17 AM

I do heard similar story a couple of days before as do you mean with same! Even I sure hope these cases are a sign of America waking up about Pharma
Huh, what? Who's paying $704 million and why? I thought pharmaceutical companies would be exempt from damage awards because they are developing drugs on that "fast-track" process the FDA approved to get drugs for "crisis" diseases on the market. Since the HIV community wants their
drugs and they want them NOW, then I guess they shouldn't be suing when they get sick(er) from drugs that weren't thoroughly tested. And exactly what "damages" were incurred? Since the alternative to drug treatment is DEATH, even if the drugs killed the patients it represented no damage worse that what would have happened without treatment.

"Since the alternative to drug treatment is DEATH, even if the drugs killed the patients it represented no damage worse that what would have happened without treatment."

I beg to differ, Andrew. At this point in time, the EXISTING HIV/AIDS medications that are FDA approved and efficacious, are approved by the FDA. Taking these "older school" triple antivirals is the alternative to Maraviroc, and in my experience, if taken adequately and consistency, they can be effective for many years. Maybe, we should all just take a step back and look at the principles involved, rather than the harm incurred, by the act.

What about ethical research? What about lines that cannot be crossed according to the laws. Are not the laws put into place to protect people with HIV? This isn't a story about whether the drug is useful or necessary but it looks to me like a story Pfizer crossing the line. All pharma sales reps are governed by FDA rules, should that just apply to cancer reps? or pain reps? you name the rep? This is story about possible coercion from people who's morale character in handling research, sales, and marketing is constantly being called into question> It would be nice if Pfizer would for once not embroil themselves in controversy especially with a drug that may prove to be useful. What harm has been done? Have you met any sales reps lately? They are not in the position to direct research which is why medical affairs is strictly kept separate from sales. Pfizer is treating HIV research like it does everything else money money money..and I guarantee you if the market potential wasn't there this drug would have gone away along time ago. HIV patients are dollars so lets not attribute any altruistic motives to Pfizer. Hey its just market prep right? No one was harmed right? Until someone is harmed and then the story is different.....dollars for research sounds like a good deal to me...

If men knew to father all their babies before 33 or with sperm cryobanked in their mid 20s to 30 there would be less chronic illness like cancer, diabetes, schizophrenia, autism, Alzheimer's, Duchenne's, MS, hemophilia, fibromyalgia, etc. Who sold and is still selling the myth of there being no male biological clock?

I was at a program in Jacobi Hospital in Bronx NY where these slides were presented by a Pfe VP. I thought that he did the research and that the drug was approved.
It was supported by sales reps as well.

Did anyone call the FDA regarding these sales tactics. I feel like I was back in 1988 when I could sit thru one of these presentations and have a sales rep pass me a plate of Ziti and a coke.

As a Pfizer HIV/AIDS Sales Rep I can tell you that we were never given a slide deck to pass to anyone, we were never told there would be compensation for the expanded access studies and finally there is alot of evidence to show that we were instructed to do just the opposite - not share any information of any kind, simply ask the physicians if they would like information on the expanded access program and to forward the information. I am tired of allegations with no merit - and I would challenge Jane Roe to prove her allegations if I had the opportunity to face her. If she did what she claimed then she knew going into it that she was wrong, and all she had to do was contact one of the several thousand lawyers that watch our every move in this company. She showed that she was not willing to follow company policies and when she compromised herself it was easier to become an "inside informant" than to follow the policies she had pledged to adhere to.