The Lancet: Legal drugs more dangerous than many illegal drugs.

One of the world's preeminent medical journals is the Lancet. So when this publication gets into the debate about the harm of illegal and legal drugs, the rest of us should at least pay attention.

A paper published in The Lancet has put together a scale to assess the relative levels of harm from various drugs, both legal and illegal: Development of a rational scale to assess the harm of drugs of potential misuse, The Lancet, Volume 369, Issue 9566, 24 March 2007-30 March 2007, Pages 1047-1053, David Nutt, Leslie A King, William Saulsbury and Colin Blakemore.

The work was carried out by a group of eminent scientists and the surveys were designed to rate drugs for harm for three different categories; physical harm, dependence, and social harm.

The notewory result is that alcohol, which is legal, is one of our most dangerous drugs, and cannabis, which is not legal (except for Amsterdam) is less dangerous than both alcohol and tobacco. Of course, this chart also puts into question our entire drug enforcement policy.

And the third most dangerous category of drugs? 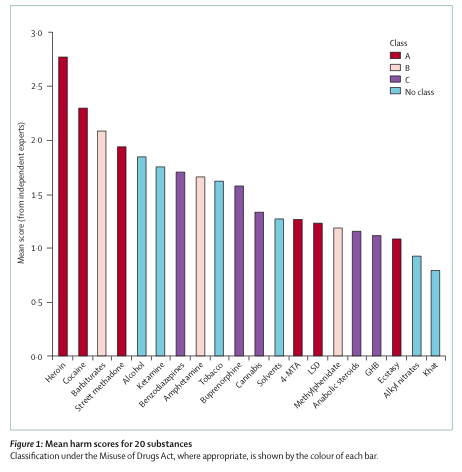 thanks for the bar chart, doc. i've always said i don't fully understand why we as a society are so hard on smokers, when drinking ruins more lives...here it is...in colour!! haha! also raises really important awareness of how dangerous certain types of prescription drugs are. people have too much faith in their docs, nurses and pharmacists sometiems, what they should be doing is questioning more!!

When legal drugs cause as much or more harm than illegal drugs, why are doctors so highly insulted if you refer to them as drug pushers.

They pat themselves on the back for sharing the freebies given them by pharma reps--and tell us that they do it to help those who cannot afford the medication. Sounds good, doesn't it. But the street pusher--with his little bag or two that he can give away, to hook a potential user--isn't doing anything different than our elitist medical doctors. (I know, I've painted with a very broad brush, but you get the concept.)
Let's call a spade a spade and keep things honest.

Then, if a medication "works", many doctors see additional financial rewards for their continued service of Big Pharma. That isn't pimping???