Think YOUR commute is bad? 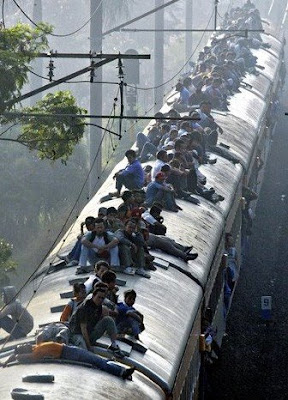 What a laconic and yet precise request. However no words are needed here. Of course we are better of here in USA, Canada and most of Europe. But for how long? With the almost free for all emigration to these parts from those parts that this picture is from and from some others (like China) not much better places, we too will become the same.
On top of this there is a seemingly unstopable illegals invasion and in the end we'll have the same overpopulation righ here in the good old USA. If anyone thinks that our technological superiority will be able to cope with such influx for ever. Think again and look at this picture. At one time these trains were full only inside and everyone had a seat. Not any more. If nothing serious is done about the overpopulation everywhere we will be looking at same pictures here to. Maybe not in 20 years or so but in less than 100 for sure.
Has anyone read the book "The Ships of last voyage". We already had few ships at BC shores with cargo of illegals. The ships were sunk as future reefs for the fish to move in. Quite a trade.
ps; the illegals are Ok, they stayed.